JSON modules and CSS modules provide several ergonomic benefits for web component developers. They provide easy integration into the JavaScript module graph with automatic deduping of dependencies, and eliminate the need to manually manage fetch()es or pollute the DOM with extra <style> and <link rel="stylesheet"> elements.

Additionally, there are important behavioral differences and quantitative performance wins to JSON and CSS modules over the current equivalents. This document describes these advantages and illustrates them with code samples.

Note that as of August 2021, Edge or Chrome >=93 is required to run the CSS module examples.

A naive attempt to replicate the functionality of JSON modules with a JavaScript module wrapper might look something like this:

But, because the fetch() completes asynchronously the importer can’t safely use the imported JSON object immediately. So, the module can instead export a Promise:

Now, however, importers are saddled with the responsibility of waiting for the Promise to resolve, and if they want to export anything that depends on the result of the originally imported Promise they must themselves export a Promise.

This necessity to export Promises will eventually be resolved by Top-level Await when it becomes standardized. Running with the experimental V8 –js-flags=”–harmony-top-level-await”, the simulated JSON module can be written the following way:

From the perspective of the importer this is ergonomically more or less equivalent to native JSON modules. However it still has these disadvantages:

And the above depends on the standardization and broad adoption of top-level await. Until that happens, devs are stuck exporting a Promise that the importer needs to deal with.

A common way of applying a custom element’s styles is to include a <style> element or (perhaps less commonly?) a <link> element in the custom element’s shadow root. This suffers from the problem that for each instance of the shadow element that exists on the page, there is an additional copy of the <style>/<link> element that gets stamped out. It costs CPU cycles to instantiate these extra elements, and do the necessary work when they are connected to the document. There is also memory overhead for their allocations.

A custom element that pulls in its styles with CSS module, however, only processes the stylesheet one time, when the sheet is imported, and there is no cost for an additional element in each custom element instance’s shadow root. For a page that has many instances of the custom element, this can result in percievable performance and memory differences.

The following graph is characteristic of the results: 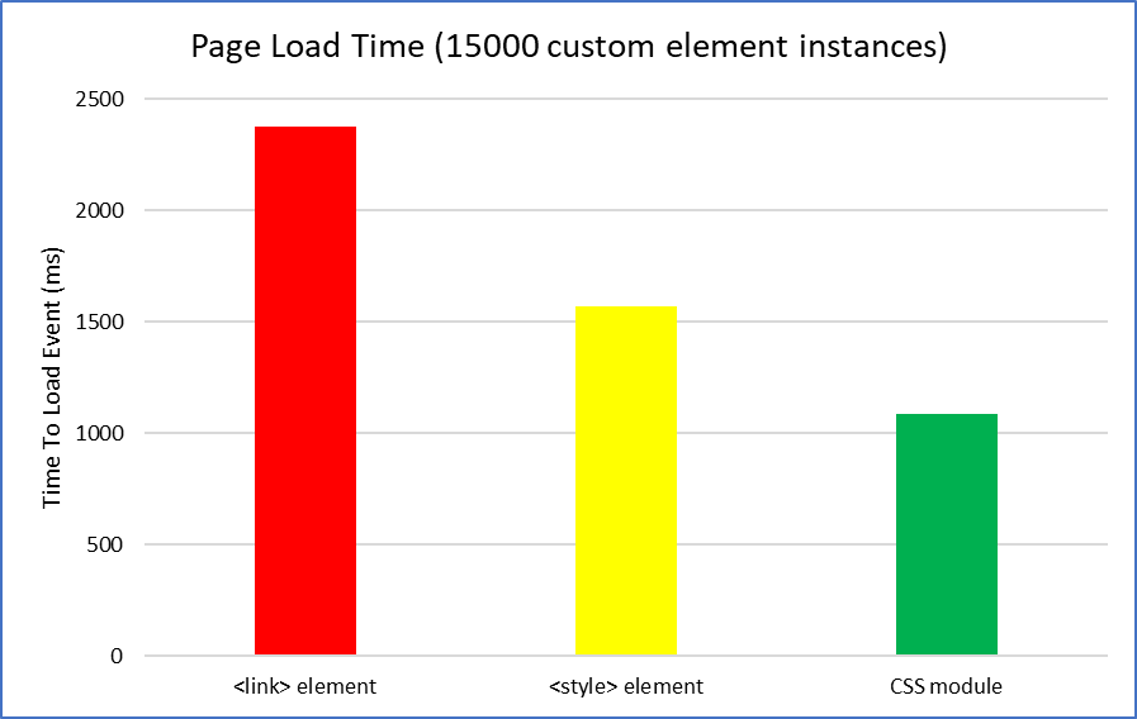 Of course the absolute times will change per machine, but I observe a similar ratio of load times across different environments.

Digging into the performance traces, we found that the gains came from the areas we expected:

These results make sense; for the <link> and <style> approaches, each custom element instance must have its own instance of one of these elements. It takes time to allocate this element, and process its various rules for insertion into the DOM tree. For example, setting up all of the StyleSheet fetches for the <link> element approach takes a nontrivial amount of time even though they all end up hitting the cache. With CSS modules on the other hand, there is just a single CSSStyleSheet instance for the entire page.

There are also memory savings from omitting the extra elements. After reaching baseline (putting tabs in background and waiting for final GC at ~60 seconds) I see these numbers like this:

Demo 2: CSS/JSON modules have a lower memory footprint than inlining the CSS/JSON as a JavaScript string

An alternative non-module approach for packaging CSS/JSON in a custom element is to inline the content as a JavaScript string rather than fetch()ing it dynamically, and feeding it into a Constructed Stylesheet. This eliminates the issues in Demo 1 where extra work is repeated for each custom element instance. However, in addition to the clunky developer ergonimics of a bunch of inlined JavaScript string content in one’s custom element JS logic, this approach can still have an extra memory cost. This is due to the fact that the original JS string lives on alongside the CSSStyleSheet or JSON object that it is eventually parsed into. Whereas with CSS/JSON modules, nothing persists but the CSSStylesheet or JSON object.

Demo 2 illustrates this difference. Both the no-module and the module case load a custom element that pulls in ~30MB of CSS. The no-module case imports inlines it in the JS file defining the custom element, in the style of some of the existing Chromium layered API elements. The module case imports the same CSS as a CSS module. After reaching steady-state, the memory difference is around the same ~30MB as the raw CSS text:

This steady state is reached after leaving both tabs in the background for ~60 seconds. Before this final garbage collection, the difference is even more stark; in my observations the inline CSS case hovers around ~95MB for the first 60 seconds, whereas the CSS modules tab goes down to ~38MB within the first few seconds.

With <link rel="stylesheet"> in shadowRoot:

Using CSS modules, styles.css is fetched as part of processing the module graph, before any JavaScript is executed.

If styles.css was slow to arrive over the network, or was large enough to take a nontrivial amount of time to parse, front-loading the work could result in a user-percievable difference in how early the styles are applied to the page.

In V8, it’s faster to load a JSON object by feeding a string to JSON.parse() than by creating the equivalent JavaScript object directly. That is, this:

Will tend to be faster than this:

This V8 dev blog post goes into more detail, including V8 performance data. Put simply, JSON.parse is cheaper because the JSON format is significantly simpler than the JavaScript language, so parsing it can be done much more quickly.

JSON modules share the performance advantage of JSON.parse, because they basically do a JSON.parse under the hood; at no point does the content of a JSON module need to be parsed as JavaScript.

I’ve placed a simple demo of this difference here. Both versions load the same 35 MB of JSON content. One loads it as a JSON module and the other inlines the content as a JavaScript object. Over 10 runs, all from a cold start, I observe the JSON module version loading in an average of 581 ms while the JS object version takes 1769 ms.

Another alternative is to inline the content as a JS string fed directly to JSON.parse, rather than going through a JSON module. However, this approach can easily suffer from the same pitfall outlined in Demo 2 where the string is never garbage collectible, resulting in unnecessary memory bloat relative to the JSON modules approach.